The Art of TIG Welding Provides Value in Manufacturing

With seemingly every fourth person you pass displaying multiple tattoos on their exposed arms, it’s easy to see the precise detailing that goes into the art of ink on skin. This art is one of precision and though far removed on the spectrum of application, welding can also be as artistic and precise.

The same degree of accuracy can be achieved with metal by using the art of gas tungsten arc welding, more popularly known as TIG welding. TIG welding is commonly used for welding steel, stainless steel, aluminum, copper alloys and magnesium. It is considered one of the highest-quality and highest-purity of all welds, while also being one of the most-challenging of weldments to master, due to its intricate nature.

In TIG welding, a coalescence between two or more metals is created by an arc formed between a non-consumable tungsten electrode and the base metal. At Axenics, TIG welding is performed manually (or by hand) by Brian Thessen and three other team members.

Brian has been part of Axenics for more than three years, but he has been welding for nearly 25 years. He fell in love with the art at a young age and said he would still do it even if he didn’t get paid. In fact, when he’s not professionally welding, Brian has been known to use TIG welding in art pieces that are displayed in his home. More on the difference between TIG welding metal art and more-typical metal art a little later in this post.

While TIG welding is preferred in many industries for its precision and flexibility, the process is not known for its speed. TIG welding relies on human integration with the welder more than other weldments, Brian said. He’s typically using both hands and sometimes both feet when TIG welding. 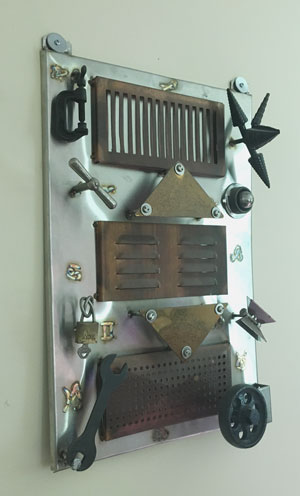 Very fine lines can be created with TIG welding. “Literally to the point of a needle,” Brian said about the tip of the welder. Visually, he said, it looks similar to a tattoo artist’s needle. When the electricity is transferred from the welder and then to the metal, it comes out very sharp, like the first letter you would draw with a pencil. This is important to industries like medical device manufacturing and aerospace where tolerances between two pieces have to be very, very miniscule.

“Imagine placing two of your hairs next to each other with no space between,” Brian said, comparing the accepted tolerance size for some welds. While the Axenics team is performing TIG welds as small as a .01-inch line, they can still do it with the naked eye and not use magnification.

Safety gear, though, is essential, including gloves and a welding mask. With TIG welding, ultraviolet light that can burn the skin without a person feeling much heat is a risk, so when performed, all skin needs to be covered.

One of the only hindrances of TIG welding is that it has to be a clean weld. That’s likely why you don’t see as many metal artisans using TIG welding to put big pieces together with rusty, metallic pieces.

Brian prefers abstract TIG welding, because it allows the welder and inner artist to come together and create something that is one-of-a-kind and mind-expanding, he said.

“One hundred different people can see 100 different things,” he said of the favorite pieces of art he’s created. Of course, he also does non-abstract, too. “I made a bird. The feathers are little knives welded onto a bigger knife that is the wing, to give it dimension. I [also] did a very icky-looking mosquito with a drill bit for a needle. In my mind, if it was alive, it could punch holes in your gas tank and suck out the fuel.”

With TIG welding allowing for different metals to be combined – such as welding stainless steel and copper together – the possibilities for manufacturing or creating breathtaking artworks are nearly limitless.

Do you need high quality weldment services that are both precise and flexible? Contact Axenics to learn more about the customized solutions we provide.

In the Axenics Blog, we provide unique insight regarding the contract manufacturing topics and concerns that many of you are asking about.