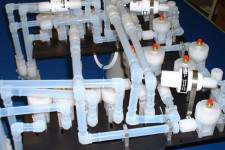 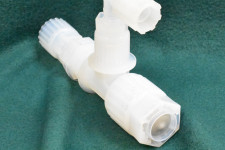 Dick Carpentier, who oversees high-purity and orbital welding in the cleanroom at Axenics’ Nashua, NH location, will observe Veterans Day on Sunday, November 11, while eyeing his retirement (somewhere down the line).

Dick is actually pretty thrilled to be back at Axenics after taking time to heal for a few months due to a complete knee replacement. It’s coming along nicely, though still a bit sore, he said.

(There are metal parts in his knee now, but the veteran welder has no plans to tinker on it himself, despite being an expert in his field.)

Going back 50 years, Dick knew a lot of his classmates were getting drafted into the Army about a month after high school, as the Vietnam War was in full swing. He proactively signed up for the Navy, and served from 1969 to 1973.

Dick was active on the flight deck of an aircraft carrier, where he served as an Aviation Ordnanceman and inspected, handled and serviced machine gun parts, rocket components and bombs.

One fascinating nugget Dick shared was that he was also part of the security team for then President Richard Milhous Nixon, pre-impeachment.

After leaving the Navy, Dick studied hand welding and acquired several welding certifications, because, “What else was I gonna do, build nuclear warheads?” he laughed. He was a hardcore machine shop welder for 20 years before coming to Axenics, where his focus soon shifted to automation welding.

He has been active in the Class 100 cleanroom at Axenics since 2005 and worked for a few years on the production floor before that performing hand welding. The welding in the cleanroom is more automated.

Axenics’ Class 100 cleanroom is vacuumed, dusted and inspected internally twice per week. Eliminating contamination when it comes to cleanroom welding is a top priority, so an air purification/filtration system is used, too, and the team inside wears special attire to avoid any skin that may flake from their bodies from getting into the environment. Tools used in the cleanroom must be cleaned before being brought inside.

The demand for cleanroom welding has grown with near-constant advances in the semiconductor industry.

“I teach the younger people here all the tricks of the trade, and I encourage them to go to school,” Dick said.

While he ponders retirement in maybe a year or two, Dick truly has lived a very full life career-wise. He was also a police officer for a small town “on the side,” he said. “I’ve been around.”

Mya Jones is the newest member of the welding team at Axenics. She began full-time with us after graduating from Greater Lowell Technical High School with a focus on metal fabrication.

END_OF_DOCUMENT_TOKEN_TO_BE_REPLACED

6 advantages of an employee gym

6 advantages of an employee gym

Axenics added an employee gym to our new headquarters in Tyngsboro, MA, which is available to our team 24 hours per day, seven days a week.