“It was like someone was throwing rocks at the windows—one by one, they were breaking.” 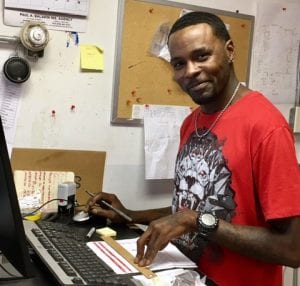 “We knew it was going to rain, but we had no idea it was going to be that bad,” says Gauff. “It wasn’t until around 3 a.m. that it became obvious what was going on—we heard water coming down the stairways in the hotel. They evacuated everyone down the emergency stairs, and we started hearing the alarms. We saw people running; it was pitch black, all the power was out.”

Gauff, along with his sister and three-year-old nephew, were told by police at this point to head either to the convention center or the Superdome. They chose the latter, sleeping among the crowd of roughly 16,000 people for four straight days.

“After FEMA came and restored power, I was able to check my email,” says Gauff. “My girlfriend at the time, Amanda, was living in New Hampshire, and I knew that we had to get out of New Orleans, to leave the state. A couple of us walked over the bridge, and we ended up catching a ride from Montgomery to Greenville, GA. I got a bus ticket to New Hampshire and have been here ever since.”

Meanwhile, Gauff’s mother and sister moved to Houston. In a cruel turn of events, they experienced another devastating hurricane in the form of Harvey, which caused major damage and flooding throughout the city in late August.

“My mom’s home is a total loss,” says Gauff. “She’s been through three hurricanes now—Harvey, Katrina and Betsy. The real concern, though, was my little sister. They lost touch and were separated for four days during the storm. After some extensive searching, my uncle finally found her in an abandoned school where she was seeking shelter.”

In an effort to help Gauff’s mother regain stability, Axenics employees raised a total of $1,000 and sent the donation—along with essentials such as socks, toothpaste, clothing and other items—to Houston.

“I spoke to her yesterday, and she was so happy to receive the box,” says Gauff.” She’s leaving Houston with my sister for St. Louis, where hopefully she can find some peace and quiet for a while.”

END_OF_DOCUMENT_TOKEN_TO_BE_REPLACED

Contract welding entails a manufacturer hiring an outside partner to produce welds on components or welds on final products based on the hiring manufacturer’s design and specifications.